Home > Media > Zane Mirfin Articles 2017
Wildside is a bi-weekly column that features in The Nelson Mail, the Nelson region's major newspaper.  Since July 2008, the column has showcased all things outdoor and celebrated the diversity of outdoor opportunity within the northern South Island.  Every column is on a different outdoor topic or theme so you can regularly check out Zane Mirfin's outdoor adventures.

Kiwi Hunters really get their goat 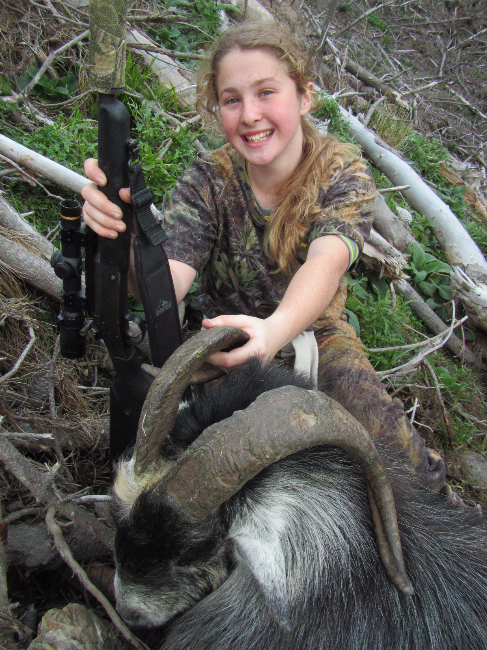 From a trophy perspective, a nice set of wide-spreading curly horns is always an attraction to any hunter.
Goats are wonderful feral creatures. Spread far and wide throughout New Zealand on both public and private wildlands, they are intelligent, playful, curious, and highly social wild animals.

One of the first domesticated animals in the history of humankind, goats have been farmed and herded by humans for more than 10,000 years.

Neolithic farmers of the Mesopotamian Fertile Crescent were responsible for this domestication and they spread their species and technological innovation globally to create the modern world in which we inhabit today.  Descended originally from wild bezoar ibex native to the mountains of Western Asia, there are about 300 recognised breeds of goat worldwide.

Goat jokes aside, goats have served mankind well over millennia, providing milk, meat, dung for fuel, fibre, hair, bone, skin, and sinew. According to the UN Food and Agriculture Organisation there were more than 924 million live goats around the globe in 2011.

Goats are individuals, much like humans, and describing a typical goat is challenging. They come big and small, virtually every colour, but most have two horns, a beard, and a short tail. Being ruminants with a four-chambered stomach, goats are browsing animals that can eat virtually any vegetation, and survive in harsh arid environments in which most other animals would perish.

They are also very agile animals that are equally at home on rugged sea cliffs, high alpine valleys, or in dense rainforest. Goats even regularly climb trees to reach choice morsels and often reach the ripe old age of fifteen to eighteen years old. Highly fertile, there is nothing as randy as an old billy goat, with female nanny goats regularly giving birth to twins and triplets.
To many people the most offensive trait of goats can be the strong scent emanated by the mature males or bucks. During the rut, mature billy goats will urinate on their forelegs and face to enhance their attractiveness to females. Sebaceous glands at the base of the horns also add to the male goat's odour. Actually I don't mind the distinctive goat smell, which can be pretty exciting when you are stalking in close from downwind with rifle in hand.
Feral goats have been part of the New Zealand landscape ever since Europeans first arrived on these shaky isles. Captain James Cook released a pair of goats into the Marlborough Sounds in 1773, and since that time, whalers, sealers, mariners, explorers, and goldminers have released goats all over NZ, and even many offshore islands as food for castaways.

So why would anyone want to hunt feral goats? Well, firstly they can be a plentiful resource, often living nearby and adjacent to major population centres and accessible to all. With no real commercial value at this point in time, access is often readily available onto private land and goats are a great training resource for new hunters too.
From a trophy perspective, a nice set of wide-spreading curly horns is always an attraction to any hunter. The best heads always come from goats with angora ancestry, and Hawkes Bay genetics have now been transferred all over New Zealand to game estates and private properties, where trophy goats may even wander across onto public wildlands.

Many Kiwi hunters and their families enjoy eating goat meat. Most people would be surprised to learn that goat meat makes up 60 per cent of the red meat eaten worldwide and is eaten throughout Africa, the Middle East, Caribbean, and Asia. Indeed the goat curries and dishes of Bangladesh, Pakistan, and India are world famous.

Goat meat can be prepared in many ways including stewing, baking, grilling, barbequing, canning, and frying, as well as being minced, curried, or made into sausages, salamis and jerky.

Many people in our local communities eat feral goat meat (or chevron as the French know it) regularly. The young animals are always best, although accountant Garry Livick once instructed me to shoot him some big mature animals because the meat held together better in his Fijjian-style goat curries.

As a university student, the inhabitants of the Christchurch flats I lived in, regularly dined on goats we harvested during weekends and varsity holidays. Interestingly, goat meat has about the same amount of protein as chicken breast and contains more iron than beef. Red goat meat is also leaner with less cholesterol and fat than both beef and lamb with obvious health benefits.

In many ways it is a shame that feral goats are viewed as such an environmental pest by bureaucratic authorities with huge tonnages of prime meat protein rotting annually on public lands killed by poison and "search and destroy" helicopter culling, while many urban families increasingly struggle to afford quality meat on their table and in their diet.

From a recreational perspective though, there is always somewhere that local hunters can go to shoot a few goats for horns, hides, and family kai. Winter time is a great time to hunt goats as short days and lower temperatures mean they are often out actively feeding throughout the day.

A recent family goat hunt on private land was a great tonic from the ills of urban living and seven Mirfins headed forth on a day of action and adventure.

Guided by brother Scott and I, we had Grandad Stuart along, plus four grandkids Jake, Rosie, Lochy, and Ryan. Sometimes in the past,  I've been criticised with this Wildside column for writing what may seem like the family diary, but you just can't beat being outdoors with your family.

All the kids and Grandad shot wild goats after a magic day of stalking on the hill and there were many nice cuts of meat to take home for family dining. The highlight for me was enjoying the obvious affection between grandfather and grandkids, and teaching Rosie, 13, to hunt is always something special as a father.
Right at the end of the day as evening gloom came upon the land, Rosie, Lochy and I stalked a mob of goats high on the hill. In open terrain and cutover plantation forest we just couldn't get any closer to the wily mob that were beyond two hundred meters in distance.
There was no option but to wait and see if the group led by a huge-bodied and shaggy-maned billy goat we named "Big Gray" would move closer and downhill toward our strategic shooting position.
Rosie's aim was straight and true, and intoxicated by the fragrance of wild goat and gunpowder, we raced downwards while darkness overtook us and Rosie proudly carried her first set of goat horns off the hill.